How to Uncover Old Wall Paneling 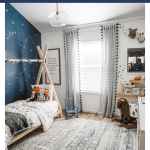 Whitney Zeller of Creating Home with Whit loves it when her home is full of charm. But when she moved to Austin, Texas from Pittsburgh, she soon realized she’d be moving from a charming older home into a “cookie cutter” house. “My current home looks like my neighbor’s,” Whitney says, explaining how 90% of the houses on her block are similar, if not the same exact floor plan. So she decided to make her home unique, beginning with her son’s room. The result is a boy’s adventure bedroom.

Even though you can’t always have a custom-build home, there are ways to add style! “We wanted the best affordable home in the best school district,” Whitney says. But Whitney and her husband made a deal. They would move into the house if Whitney could redo all the rooms. “We redid the children’s rooms first,” she says, “because kids go through so much in a move.”

She went to work, transforming this room into a boy’s adventure bedroom. It was beige and plain in ways that didn’t speak to what a child’s room should be—fun, vibrant, and full of toys! The carpet went, along with the beige, which was painted over in Simply White by Benjamin Moore. Later, the accent wall was added in Gentlemen’s Grey (what a name for a boy’s room!) by Benjamin Moore. It never hurts to add a pop of color! She then added vinyl star stickers to further bring out the boy’s adventure bedroom.

The adventure theme all started when Whitney came across the tepee bed. Sometimes knowing where to place the bed really matters. And seeing the unique bed, she thought, “Ok, this is where we are going.”  The entire look of the room gives the feeling of “camping under the stars.” Even the bed’s comforter includes a print of an explorer’s map—deserts, plains and oceans. Meanwhile, stuffed toy animal busts adorn the walls. “We had gone up to Magnolia Market,” Whitney reveals, “and we knew we wanted to use them somehow.”

The family made the airplanes (above the closet) themselves. And it only took an afternoon! Whitney suggests to repurpose whenever you can. “But keep it affordable because children’s tastes change as they grow up.” Luckily for Whitney, her little man hasn’t set off on his adventures into adulthood just yet. Talking about her boy’s snake plant, she says, “It teaches him responsibility and makes him feel like a big boy, and he is becoming one slowly—thankfully,” she laughs, emphasizing the word “slowly.”

For now, her son is happy showing off his room to guests. “He tells everyone, ‘come tour my bedroom!’ His favorite part is the buffalo rocker,” she says. Whitney’s son’s room proves her message. “You can make your house your own. You can do it! Sometimes we can accomplish a lot, if you are willing to put the time in.”

Looking for more décor your kids will love? Check out these perfect farmhouse kids gifts. Of course, don’t forget to follow us on Instagram, Facebook and Pinterest to get your daily dose of farmhouse inspiration! 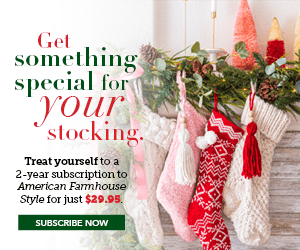 A Masculine Guest Room With Style

A Custom Modern Farmhouse in Georgia

Sign up for our newsletter to get the 2021 collection of free Christmas printables to help you decorate, organize your gift list and record your favorite recipes!